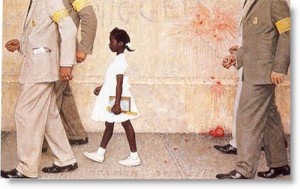 Ruby Bridges, a civil rights icon, is one of the first African-American children to attend and integrate an all-white elementary school in the South. Ruby was born in 1954 in Tylertown, Mississippi but moved to New Orleans, LA shortly after. In 1960, Ruby’s parents received a phone call from the National Association for the Advancement of Colored People (NAACP). The NAACP inquired about Ruby’s potential participation in the integration of the New Orleans School system, to which her parents volunteered Ruby to participate in.

Ruby was apart of a group of four children who integrated both Mcdonough No. 19; William Frantz Elementary. Unfortunately Ruby was the only student placed at  William Frantz, the other three went to McDonogh No. 19. On November 14, 1960, six year old Ruby, was escorted into William Frantz Elementary by a group police officers who protected her from the violent and racist white mob of protesters who tried to prevent her from integrating the school.

Bridges and her family faced tremendous adversity during her time at William Frantz. However it is her courage, strength, and leadership, that helped  start the  integration of  Southern schools.

On the 50th anniversary of her historic integration efforts, President Obama joined Ruby Bridges in The White House where he displays the Norman Rockwell painting inspired by her efforts.

Ruby still resides in New Orleans today, and is the chair of the Ruby Bridges Foundation.