John and Abigail Adams have one of the most storied love affairs in early American history. They wrote long and effusive letters to one another on a regular basis for decades. Therefore, historians have been able to trace the extraordinary insight Abigail offered John as he engaged in founding the new country. Abigail had a sharp tongue and an unrelenting willingness to use it. Those characteristics, combined with her deep political knowledge, meant that she was rarely called “Lady Adams.” Instead, the preferred term for her during her husband’s tenure was “Mrs. President.”


Remember the ladies.” -Abigail Adams, in a letter written in March 1776 to John, who was serving as a representative to the Continental Congress. 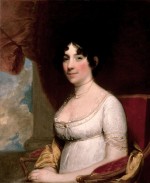 Dolley Madison was the most influential of the early First Ladies, in part because she served in the role of First Lady long before her husband, James, was elected to the presidency. America’s third president, Thomas Jefferson, was a widower when he was elected, as was his Vice President, Aaron Burr. With no official First Lady to take over the tasks of entertaining, receiving guests, and managing the White House, the job fell to Dolley Madison as James Madison was serving as Secretary of State. Dolley Madison served informally as First Lady of Jefferson’s White House from 1801-1809 and then formally from 1809-1817. Over those nearly two decades she set the standard of the role of First Lady as a political helpmate, a grand entertainer, and an elegant, but approachable representative of the president’s administration.


I insist on waiting until the large picture of General Washington is secured and it requires unscrewing from the wall. This process was found too tedious for these perilous moments; I have ordered the frame to be broken and the canvas taken out; it is done.” -Dolley Madison to Lucy Washington Todd, August 23, 1814

Mary Todd Lincoln is the most grief stricken First Lady in our history. Having grown up in a large and prosperous family, Mary Todd was ambitious and famously indulgent as a parent. She and Abraham had four sons. All but one of her sons predeceased her and she grieved each one publicly and painfully. Mary Todd, of course, also lost her doting husband to an assassin’s bullet while she sat beside him in a theater. She remained inconsolable from each of these losses to such an extent that history and many of her contemporaries (including her one surviving son) believed she was mentally unstable.


If I had not felt the spur of necessity urging me to cheer Mr. Lincoln, whose grief was as great as my own, I would have never smiled again.” –Mary Todd Lincoln after the death of her son Eddie

Some historians have argued that Edith Wilson was the first woman to serve as president of the United States. After President Woodrow Wilson’s first wife, Ellen, died, Woodrow met, dated, and married Edith. She was his steady companion, confidant, and often his unofficial secretary during the second term. But in 1919, President Wilson suffered a severe stroke and Edith took over all decisions about who would be allowed to see him and what matters of state would be presented to him. History still does not know how many of the decisions made during the months of the Woodrow’s recuperation were actually made by Edith, which prompted many to believe she was acting, for all intents, as president. She always strenuously denied it. The popular ABC drama, Scandal, is exploring a similar story line right now.


I never made a decision regarding the disposition of public affairs.” -Edith Wilson 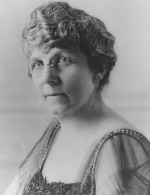 Florence Harding was the first First Lady to truly understand and cultivate the Washington media. When she met Warren Harding she was already divorced and had left her young son to be raised by his father. Even after marrying the man who would be president she pursued her own business interests. Florence successfully and profitably published the Marion Star in Ohio. Florence actively charmed and directed the reporters of her age. She was the first woman to openly campaign for her husband and she often invited Hollywood stars to the White House.


I know that’s best for the President. He does well when he listen to me and poorly when he does not.” – Florence Harding

Louise Hoover was an extremely cosmopolitan and highly politically active First Lady. She was the first woman in the United States to receive a bachelor’s degree in geology in 1898. After their wedding, she and Herbert lived for several years in China because Herbert was working as a consultant in the mines. They both became fluent in Chinese. At various points they also lived in Japan, Australia, India, Egypt, Russia, Burma, and London. When the couple moved back to the United States, she was elected national president of the Girl Scouts. She was a life long supporter of sports and athletic opportunities for girls. Having lived all over the world, Lou found the segregation policies of D.C. untenable, and she invited the wife of Oscar DePriest, the first African American elected to Congress in 30 years, to attend an afternoon women’s tea. She was condemned for the choice, but continued to invite other black women during her years in the White House.


Bad men are elected by good women who stay at home from the polls on Election Day.” -Lou Hoover

There is no doubt that Eleanor Roosevelt is the most beloved and admired First Lady in American history. No one before her had so fully used the position of First Lady to directly influence policy and public opinion. She was the niece of President Teddy Roosevelt and the 5th cousin to her own husband, Franklin Roosevelt. She spent her entire life in direct service to the poor and underserved communities. During her years in the White House she held independent press conferences and restricted her press conferences exclusively to women reporters. Every Monday through Friday from 1936 to 1962 Eleanor wrote a widely syndicated newspaper column titled My Day that described her personal life and political ideas. In short, she was the first, and still only, First Lady blogger. She wrote every word herself. 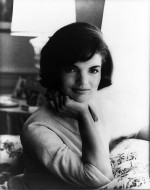 Jacquelyn Kennedy is the most elegant modern First Lady and she sought to bring her elegance to the White House. Many contemporary observers think of Kennedy as simply young, attractive and interested in the domestic arts, but that is an underestimation of Mrs. Kennedy’s deep artistic knowledge and considerable talents in historic preservation. She was appalled to learn that the White House was not treated as a repository of American art and culture and she set out to bring a clear appreciation for and commitment to preserving the historic nature of the national home.


I feel as though I have just been turned into a piece of public property. It’s really frightening to lose your anonymity at thirty-one.” -Jacquelyn Kennedy

“Lady Bird” Johnson was a shrewd and strategic political partner for her husband. She was also his best friend. When Lyndon was called to active duty after Pearl Harbor, she took over and ran his Congressional office. When he needed a financial base from which to run for higher office, she tapped her inheritance to invest in a radio station, whose later sale made them quite wealthy. When Lyndon needed to secure Southern votes, Lady Bird went on a wildly successful solo whistle-stop train tour through the South. Lyndon, the great champion of the poor and of Civil Rights, had no greater champion than Lady Bird.

Betty Ford was a surprisingly outspoken First Lady who chose to openly disagree with her husband on important political issues. The Fords never campaigned to be in the White House. Gerald Ford became president in the aftermath of the Watergate, which is part of why Americans found Betty Ford to be a refreshing change of pace. She held nothing back! Ford openly disagreed with her husband’s position on abortion. She told the American public about her breast cancer diagnosis at a time when very few women discussed the disease. And ultimately she shared that she had an addiction to alcohol and painkillers. Much of her later years were devoted to offering other addicts the space and opportunity to recover.


“I never believed that being First Lady should prevent me from expressing my ideas.” -Betty Ford

Rosalyn Carter often campaigned for her husband in local K-Mart stores. She was instrumental in passage of the 1980 Mental Health Systems Act.

Nancy Reagan once said, “My life really began when I married my husband.” Nancy was often reviled, despite her unwavering devotion to a man who is one of America’s most respected presidents. Lawrence Learner called her the Reagan administration’s “number one political relations problem.”

Barbara Bush is one of only two women to have been both the wife and mother of a president. She was quite devoted to her little dog, Millie.

Hillary Clinton was the first presidential spouse to testify before a Congressional committee as the architect of a public policy. She is also the only First Lady to run for president herself.

Laura Bush became the first person other than a president to deliver the weekly presidential radio address when we discussed the challenges facing Afghani women.

Want more on the First Ladies? 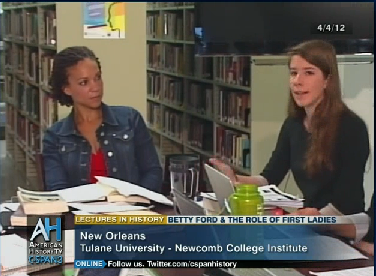 Watch the full class on Betty Ford courtesy of C-SPAN.

Download the full syllabus for the “America’s First Ladies” class.