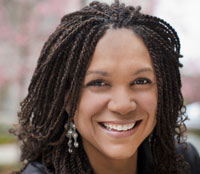 Melissa V. Harris-Perry is professor of political science at Tulane University, where she is founding director of the Anna Julia Cooper Project on Gender, Race, and Politics in the South. She previously served on the faculties of the University of Chicago and Princeton University. She is also the host of MSNBC’s “Melissa Harris-Perry.” The show airs on Saturdays and Sundays from 10AM to noon ET.

Harris-Perry is author of the well received new book, Sister Citizen: Shame, Stereotypes, and Black Women in America (Yale 2011) which argues that persistent harmful stereotypes-invisible to many but painfully familiar to black women-profoundly shape black women’s politics, contribute to policies that treat them unfairly, and make it difficult for black women to assert their rights in the political arena.

Professor Harris-Perry is a columnist for The Nation magazine, where she writes a monthly column also titled Sister Citizen. In addition to hosting her own show on MSNBC she provides expert commentary on U.S. elections, racial issues, religious questions and gender concerns for Politics Nation with Reverend Al Sharpton, The Rachel Maddow Show and The Last Word with Lawrence O’Donnell and other MSNBC shows . She is a regular commentator on Keeping it Real Radio with Reverend Al Sharpton and for many print and radio sources in the U.S. and abroad.

Her academic research is inspired by a desire to investigate the challenges facing contemporary black Americans and to better understand the multiple, creative ways that African Americans respond to these challenges. Her work is published in scholarly journals and edited volumes and her interests include the study of African American political thought, black religious ideas and practice, and social and clinical psychology.

Professor Harris-Perry’s creative and dynamic teaching is also motivated by the practical political and racial issues of our time. Professor Harris-Perry has taught students from grade school to graduate school and has been recognized for her commitment to the classroom as a site of democratic deliberation on race.

She travels extensively speaking to colleges, organizations and businesses in the United States and abroad. In 2009 Professor Harris-Perry became the youngest scholar to deliver the W.E.B. Du Bois Lectures at Harvard University. Also in 2009 she delivered the prestigious Ware Lecture, becoming the youngest woman to ever do so.

Professor Harris-Perry received her B.A. in English from Wake Forest University, her Ph.D. in political science from Duke University and an honorary doctorate from Meadville Lombard Theological School. And she studied theology at Union Theological Seminary in New York. She lives in New Orleans with her husband, James Perry, and is the mother of a terrific daughter, Parker.

Sara Kugler is a graduate of Tulane University, where she received her B.A. in Latin American Studies in 2012. As a student her research focused on the Cuban Revolution’s approach to eliminating racism and the subsequent implications for racial equity in the country. She was also co-convener of the group Students Organizing Against Racism (SOAR) and interned with the community organization Voice of the Ex-Offender (VOTE). Prior to becoming Program Coordinator, she worked as a research intern for the Cooper Project. Sara is originally from Silver Spring, Maryland and is now a proud resident of New Orleans.

Her publications appear in African American Review, Callaloo, Reconstruction: Studies in Contemporary Culture, Journal of Popular Culture, among other venues. During her residency at the Anna Julia Cooper Project on Gender, Race, and Politics in the South, she will complete the final revisions of her book Unbought and Unbossed: Transgressive Black Women, Sexuality, and the Politics of Representation for publication, as well as make continued progress on two projects: a second book You People: Race and the Global Politics of Exclusion from Katrina to Berlin and a co-edited collection on contemporary black women’s sexualities.

Eliza Arnold is a senior at Tulane University double majoring in Political Science and International Development, with a minor in Philosophy. While studying at Tulane, Eliza has been involved with many organizations in New Orleans that have strengthened her commitment to social justice. She has interned at the local Louisiana chapter of the ACLU, started an on-campus activist group calling for increased safety measures in the school’s neighborhood, and has served as a leader in her campus’ chapter of Challah for Hunger. Originally from San Francisco, Eliza hopes to return there one day after traveling and pursuing a career in sustainable development.

Morgan M. Franklin is a senior at Tulane University double majoring in Political Economy and Philosophy. On campus she has been involved in several organizations including the Nu Mu City-wide Chapter of Delta Sigma Theta Sorority, Inc., Undergraduate Student Government and College Democrats. While a student in New Orleans she has had the opportunity to be involved throughout the city in various service projects, her favorite among them being her work as a Public Service Intern for the Ellis Marsalis Center in the city’s 9th ward. In addition to her research with the Anna Julia Cooper project, Morgan is currently writing her senior thesis on voter challenge initiatives as potential mechanisms for voter suppression. Morgan is originally from Shreveport, La. and has plans of attending law school post undergrad.

Ariel Guidry is an aspiring filmmaker and a 2012 graduate of Tulane University. As a student, she pursued educational opportunities that afforded creativity and participated in writing and film projects, eventually majoring in English with a Creative Writing concentration. Her final semester at Tulane was spent working with New Orleans middle school students to produce short videos that promoted educational reform and creating video blogs for the Cooper website. This spring, she is looking forward to a published poem in the Tulane Review and to filming interviews with nonprofit founders around the city. Ariel resides in New Orleans Uptown.

Leah Jaques is a visiting student from the University of Sussex in Brighton, UK where she is pursuing a double major in Political Science and American History. At the University of Sussex she has been elected student representative for her course two years running. She also founded and was president of the American Studies society. Her work in both student government and organising fundraising events sparked her interest in the broader use of social media. It was this experience that helped her secure an internship this past summer at WPP companies where she worked in Search advertising at Group M and Maxus. In the future she hopes to apply interactive advertising to issues of social justice.

Rachel Rubinstein is a senior receiving a Bachelor of Arts in Social Policy and Sociology with a minor in Jewish Studies. Within her studies Rachel has done various research on gender and sexuality studies, including a semester at the University of Amsterdam last fall. Rachel most recently interned with ReNEW charter schools and is currently volunteering with the Urban Conservancy to promote local businesses. Rachel is originally from Boston, MA but hopes to move to Washington DC to pursue a career in public policy.