This post is part of a series by participants at the 2013 Gender, Sexuality & Hip-Hop Conference. This post originally appeared on Tiara’s blog Poetry, Pasta & Popular Propaganda. 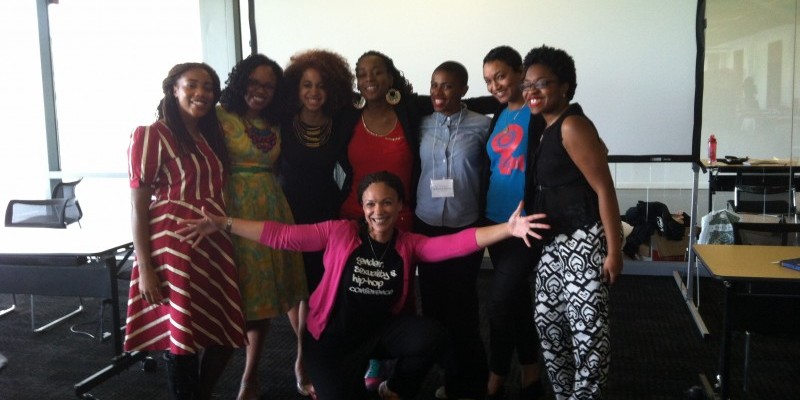 On December 4th, 2013 I pushed my ace boon coon Jazz Hudson through the Oakland Airport in a wheel chair on the way to Louisiana for a two-day conference on “Gender, Sexuality & Hip Hop” created by the amaaazing Melissa Harris-Perry. I had just come out of the darker side of nausea due to a new pregnancy with twins, and Jazz was recovering from a car accident that left her in a leg brace to say the least. But regardless of said setbacks we were determined to meet our Black Youth Project 100 sisters in Louisiana for a unique panel on gender-bending.

What is gender-bending you ask? We all gave part of a multi-dimensional definition that included Hip Hop legends such as MC Lyte, Lauryn Hill & Missy Elliot as front runners for women who bend boundaries on what is to navigate and present oneself as a woman. We even played Missy Elliot’s “The Rain” to get prepared before our panel. These MCs often “break the rules” or teeter on the lines in between masculinity and femininity; women who dare to define womanhood and sexuality on their on terms.

I, personally, as a wife, mother and feminist, often find the three titles in cognitive dissonance with each other. I often wondered how I would maintain my identity as a woman and genuinely love my husband and children. I decided long ago that no one would dictate to me their prescription for my womanhood; that instead I would offer my own recipe and it would be their choice if they wanted to sit down for dinner at my table. I reside somewhere along those lines and growing in my wisdom at 26 years of life I know now that my family can not be a source of internal opposition but of incorporation and inspiration. Thus, I have kicked the title feminist to the curb and now define myself as womanist, which is a title inclusive of the black family.

As a Collective we decided to start our panel with my video project Clique: The Fem Redux which includes myself and MC’s: RyanNicole, Dom Jones, Jazz Hudson and songstress Melissa Jones.

I sought to create a video that showcased different type of female MCs, some rappers & some poets, and to create a metaphor around women “waging war against sexism in hip hop.” It was risque to introduce a video with gun toting female vigilantes in an academic space. I figured that Hip Hop itself is not always pretty; that that was the reason we were convening in the first place, and that sometimes you have to dance the line to get the attention of various audiences. I hoped that in the end they all would embrace the metaphor. At the time I didn’t know there was such a thing as hip-hop feminism, that I was participating in a movement created by Joan Morgan. A weekend with Melissa Harris-Perry (MHP) and her super friends would only further my understanding of this plight.

We went on to continue our discussion around rape culture in hip hop by continuing with a video from the notorious west coast rapper Too Short, who gives an instructional on how to “turn girls out” – and for all you academics that means to take advantage of young girls by taking control of her mind & body by coercion or force. We directly correlated pimp culture to rape culture.

After playing the video there was a sadness that swept the room like a tsunami. A moment of silence was requested, but after there was an uneasiness that lingered that could not be addressed with mere conversation. I offered to do a libation which is an African tradition with the pouring of water that acknowledges the ancestors and recognizes the spirits of those gone before you. With the assistance of Jazz Hudson we poured libation for all those who have experienced sexual violence and for the men and women who have compromised their souls participating in such acts. Water was poured, a few tears dropped and slowly but surely the uneasiness lifted.A woman from South Africa approached me after and said, “I was surprised because I did not know Black Americans did Libation.” There are some traditions that inhibit us, while there are others that free us, and we have to recognize the difference.

We ended with a chant “Chant down Babylon, Wo-men are the bomb, We’re Ready, We’re Coming!”

I know that there are many gems to take away from this experience.

1. MHP showed me what it means to be a humble giant that reserves the right to check a fool should he step out of line. Sometimes you meet women who you admire and you feel like an ant standing next to them, but MHP makes you taller in her presence and we need more of that in the world.

2. There will always be a need for conversation and community building amongst generations of black women, and whether we agree to disagree we will be stronger in the end.

3. For the plight of women and the black community we must always remember that the combination of academia, art and acknowledgement of the soul together is the remedy that will elevate our people.

TIARA PHALON is a graduating senior at San Francisco State University where she is majoring in Africana Studies. Tiara is a Mother, Thespian, Poet, Activist, and Educator out of Oakland, CA. Her areas of focus are artistic literacy, radical healing and restorative justice. Tiara is a member of Black Youth Project 100, an activist member-based organization of 18-35 year olds, dedicated to creating justice and freedom for all Black people by building a network focused on transformative leadership development, non-violent direct action organizing, advocacy, and education.