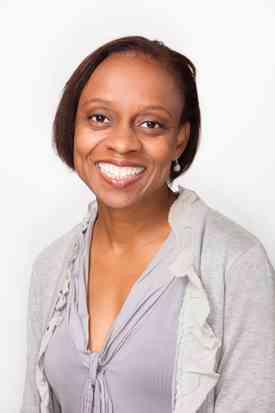 “Protecting and Policing Black Lives in the 21st Century”

A social psychologist at Stanford University, Jennifer Eberhardt investigates the consequences of the psychological association between race and crime. Through interdisciplinary collaborations and a wide ranging array of methods—from laboratory studies to novel field experiments—Eberhardt has revealed the startling, and often dispiriting, extent to which racial imagery and judgments suffuse our culture and society, and in particular shape actions and outcomes within the domain of criminal justice.

Eberhardt’s research not only shows that police officers are more likely to identify African American faces than white faces as criminal, she further shows that the race-crime association leads people to attend more closely to crime related imagery. In one experimental study, for example, people who were exposed to black faces were then more quickly able to identify a blurry image as a gun than those who were exposed to white faces or no faces.

The race-crime association extends beyond the laboratory. Using an actual database of criminal defendants convicted of a capital crime, Eberhardt has shown that among defendants convicted of murdering a white victim, defendants whose appearance was more stereotypically black (e.g. darker skinned, with a broader nose and thicker lips) were sentenced more harshly and, in particular, were more likely to be sentenced to death than if their features were less stereotypically black. This finding held even after the researchers controlled for the many non-racial factors (e.g. the severity of the crime, aggregators, mitigators, the defendant’s attractiveness, etc.) that might account for the results.

Extending the sentencing research to juveniles, Eberhardt found that bringing to mind a black juvenile offender leads people to view juveniles in general as more similar to adults and therefore deserving of more severe punishment. Further, in a study with actual registered voters, Eberhardt found that highlighting the high incarceration rate of African Americans makes people more, not less, supportive of the draconian policies that produce such disparities.

Eberhardt’s research suggests that these racialized judgments may have roots deeper than contemporary rates of crime or incarceration. In a series of studies, she has unearthed evidence that African Americans sometimes become objects of dehumanization. Specifically, Eberhardt has found that even people who profess to be racially unbiased may associate apes and African Americans, with images of one bringing to mind the other.

The dehumanization finding may help to explain the dynamics that occur within the criminal justice context, where high profile controversies feature African Americans who are shot by police or citizens who feel threatened, even though the African American is unarmed. According to Eberhardt’s research, the implicit association between African Americans and apes may lead to greater endorsement of police violence toward, or mistreatment of, an African American suspect than a white suspect.

In on-going research, Eberhardt is investigating whether the African American-ape association is one example of a more generalized belief that African Americans are not as evolved as other people. This view may, ironically, be buttressed by the (erroneous) lay belief that black Africans developed earlier in the evolutionary process than did their white counterparts who are associated with Europe.

As daunting as are the problems Eberhardt illuminates, she has recently begun to work with law enforcement agencies to design interventions to improve policing and to help agencies build and maintain trust with the communities they serve. The problems associated with race are ones we have created, she believes, and they are also ones we can solve. Spurred by the innovation that is the hallmark of Silicon Valley, she aims to combine social psychological insights with technology to improve outcomes in the criminal justice context and elsewhere.

Jennifer Eberhardt received a B.A. (1987) from the University of Cincinnati, an A.M. (1990) and Ph.D. (1993) from Harvard University. From 1995 to 1998 she taught at Yale University in the Departments of Psychology and African and African American Studies. She joined the Stanford faculty in 1998, and is currently an associate professor in the Department of Psychology and co-director of SPARQ, a university initiative to use social psychological research to address pressing social problems.

“Hip-Hop at 40: Continuing Challenges of Gender and Sexuality” 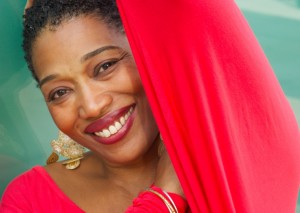 Joan Morgan is an author and cultural critic who coined the phrase “hip-hop feminism” with the publication of the bestselling When Chickenheads Come Home to Roost: My Life as a Hip-Hop Feminist.

Since she published the book in 1999, Morgan has been a widely sought after lecturer and commentator on hip-hop and feminism. An award-winning journalist, a provocative cultural critic and a self-confessed hip-hop junkie, she began her professional writing career freelancing for The Village Voice before having her work published by Vibe, Madison, Interview, MS, More, Spin, and numerous others. Formerly the Executive Editor of Essence, she’s taught hip-hop journalism at Duke University and has been a visiting scholar at Vanderbilt University.

In January 2013, she was a Visiting Lecturer at Stanford University’s Institute for the Diversity of the Arts where she taught the course “The Pleasure Principle: A Post-Hip Hop Search for a Black Feminist Politics of Pleasure.” Morgan is currently pursuing her doctorate as a McCracken Fellow enrolled in the American Studies Program at New York University.
- See more at: http://cooperproject.org/joan-morgan-to-deliver-address-hip-hop-at-40/#sthash.AIV8UCGl.dpuf

“Slipping through the Cracks: The Status of Black Females” 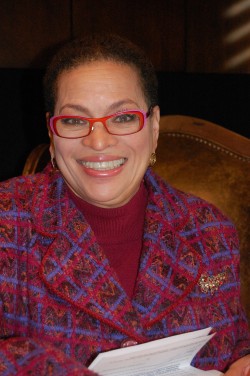 Dr. Malveaux has long been recognized for her progressive and insightful observations. She is a labor economist, noted author, and colorful commentator. Julianne Malveaux has been described by Dr. Cornel West as “the most iconoclastic public intellectual in the country.” Her contributions to the public dialogue on issues such as race, culture, gender, and their economic impacts are shaping public opinion in 21st century America.

Dr. Malveaux’s popular writing has appeared in USA Today, Black Issues in Higher Education, Ms. Magazine, Essence Magazine, and the Progressive. Her weekly columns appeared for more than a decade (1990-2003) in newspapers across the country including the Los Angeles Times, Charlotte Observer, New Orleans Tribune, Detroit Free Press, and San Francisco Examiner. She has hosted television and radio programs, and appeared widely as a commentator on networks, including CNN, BET, PBS, NBC, ABC, Fox News, MSNBC, CNBC, C-SPAN and others.

Dr. Malveaux has been a contributor to academic life since receiving her Ph.D. in economics from MIT in 1980. She has been on the faculty or visiting faculty of the New School for Social Research, San Francisco State University, the University of California (Berkeley), College of Notre Dame (San Mateo, California), Michigan State University and Howard University. She holds honorary degrees from Sojourner Douglas College (Baltimore, Maryland), Marygrove College (Detroit, Michigan), University of the District of Columbia, and Benedict College (Columbia, South Carolina). She received her bachelor’s and master’s degrees in economics at Boston College.

During her time as the15th President of Bennett College, Dr. Julianne Malveaux has been the architect of exciting and innovative transformation at America’s oldest historically black college for women. Under her leadership, the administration has identified four key focus areas: women’s leadership, entrepreneurship, excellence in communications, and global awareness. In the four short years of her presidency, Bennett College has successfully received a 10-year reaffirmation of its accreditation from the Southern Association of Colleges and Schools, markedly improved existing facilities, embarked on a $21 million capital improvements program – which marked the first major campus construction in more than 25 years – and in fall 2009 enjoyed an historic enrollment high.

A native San Franciscan, she is the Founder and Thought Leader of Last Word Productions, Inc., a multimedia production company headquartered in Washington, D.C.

“When Race Matters: Private Bodies, Public Texts or: Why Henrietta Lacks Did Not Need ‘The Help’.” 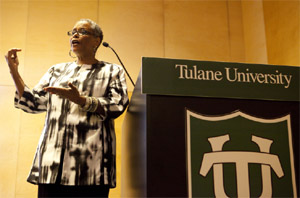 On February 23rd, 2012, Dr. Karla Holloway delivered the inaugural Anna Julia Cooper lecture, “When Race Matters: Private Bodies, Public Texts, or: Why Henrietta Lacks Did Not Need ‘The Help.’” Dr. Holloway’s lecture tied in with her latest book, Private Bodies, Public Texts: Race, Gender and Cultural Bioethics, an exploration of the complex interlocking systems of race, gender, law and medicine. Dr. Holloway used historic and contemporary examples to explain theoretical ideas about bioethics, examining how race and gender relate to determinations of which bodies “matter.” She discussed when and to whom private death is made a public spectacle in the context of Terri Schiavo, unethical medical practices in the Tuskegee syphilis experiment and experiments of Dr. J. Marion Sims, and gendered descriptions of individuals in Post Vegetative States. Dr. Holloway also suggested that the publication of private information about the family of Henrietta Lacks in the book The Immortal Life of Henrietta Lacks was ethically questionable, reminding the audience, “Consent is not an ethics pass when both parties are not on equitable footing.”

Karla FC Holloway is the James B. Duke Professor of English at Duke University, where she also holds appointments in the Law School, Women’s Studies and African and African American Studies. Her research and teaching interests focus on African American cultural studies, biocultural studies, gender, ethics and law; within these interests, she specializes in literature. The author of eight books, Holloway’s most recent publication is Private Bodies, Public Texts: Race, Gender & a Cultural Bioethics. In the book, Holloway investigates instances where private medical information and situations are forced into the public sphere, finding that the resulting drama is often played out on the bodies of women of color. The book is a call for a cultural bioethics that is accountable and attentive to historical and social inequalities in medicine and law. Holloway proposes literary narratives as a conceptual anchor for discussions of race, gender, bioethics and the right to privacy. Some of her past books include BookMarks: Reading in Black and White, Passed On: African American Mourning Stories: A Memorial and Codes of Conduct: Race, Ethics and the Color of Our Character. 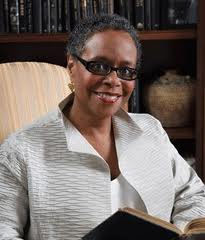 At Duke, Holloway has served as Dean of the Humanities and Social Sciences, Chair of Duke’s Appointments, Promotion and Tenure Committee and a member of the Academic Council. She serves on the boards of the Greenwall Foundation’s Advisory Board in Bioethics, Duke University’s Center for Documentary Studies and the Princeton University Council on the Study of Women and Gender. She is also the founding co-director of the John Hope Franklin Center and the Franklin Humanities Institute, and an affiliated faculty with the Duke Institute on Care at the End of Life and the Trent Center for Bioethics and Medical Humanities. More information on these institutions can be found below.